Rassull:
Famously known as "Singapore’s Only Male Bitch", Fauzi Rassull, is a popular blogger among the affluent city-state’s fashionable youngsters. Out of the many advantages of blogging, the best is that Fauzi is able to use it as a platform to voice his opinions to million of netizens out there. He feel that there is no freedom of speech at all in the world he is living in. He’s left with no other option but to use his blog so that his thoughts can and will be heard


- Fauzi Rassull slammed Xiaxue
- Underaged sex
- Being Gay isn't a choice!
- I AM AN INFLUENTIAL BLOGGER
- What have our Miss Universe accomplished from being a beauty queen
- Should Rachel Kum be considered as a role model?
- Man carry handbag. It's OK?
- Freedom of speech!!!
- Negative stereotypes in conservative Singapore
- Singaporeans dressed badly

You’ll probably pretend not to recognise or bother to pay much attention to the beautiful woman below if you’ve been brainwashed by your beloved “top blogger”. Hah! 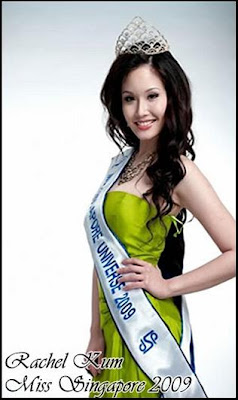 Rachel Kum was crowned Miss Singapore 2009 during
the pageant held on 9th May 2009, at Shangri-La
Hotel’s Island Ballroom.


But her success wasn’t an easy one as she had to face many speculations and controversies during her MSU’09 journey. I personally think Rachel Kum was surrounded with wicked contestants at that point of time. It was so unfortunate that she was accused by many (including fellow contestants) of allegedly skipping the preliminary audition rounds and compulsory activities. Bloody suay! Rachel has enviable good looks and of course, there are bound to be detractors out there who will try to ruin her chances! Many tried to intrude into Rachel’s life in an attempt to eliminate her and brainwashed the media (so that she will lose from all the bad publicity!) with all sorts of baseless rumours! Remember that her sudden appearance into the pageant had caused unhappiness among the contestants.

THIS IS SINGAPORE FOR YOU! 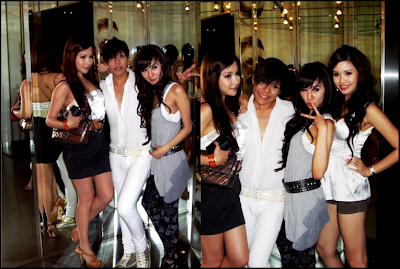 Dawn Yang, Agrivelt, myself and Rachel Kum. They are too
gorgeous to have their hair painted blonde. Hah!

In the end, that woman whom I’ve talked to before, the woman whom I personally think is so much friendlier in person won the title Miss Singapore 2009! She’s Rachel Kum herself! More importantly, their efforts and attempts to withdraw Rachel from the pageant FAILED badly! So bad that it sent off a red flag (a wake up call!) that it’s time for all jealous Singaporeans out there to come out with better tactics for other similar pageants like this. Congrats Rachel. =)

BUT IT’S NOT THE END JUST AS YET!

In case you missed the details, Rachel Kum had come under fire from alot of people (from netizens, bloggers and even critics!) demanding that she should be stripped of her title after photos of her (see below) started circulating on the Internet, less than two months before she is to represent Singapore at the Miss Universe competition which will be held in Bahamas!


Suggestive photos of Rachel surfacing on the net. 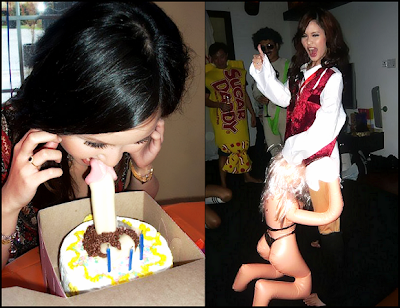 Rachel with her phallic cake and her with an inflatable doll

Everyone loves to have fun, yes? According to some sources, she was celebrating her birthday and that explains the birthday cake! It could be a themed-birthday celebration, mind you! So I don’t think it is a brilliant idea to use her birthday photos (taken way before her MSU’09) as an excuse to strip her of her title! RIDICULOUS! 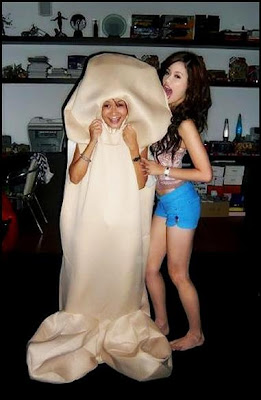 If you think this racy photo of Rachel is too skimpy and
awful to look at, oh well, bitch is worse!. You know who "

Singaporeans are just too over-reacting? Too conservative? Or BOTH?

To be honest, it’s downright stupid if Rachel Kum is unable to keep her crown because of her racy photos that emerged online recently. All of us have so many things to say! Everyone has one and is entitled to one. There are those who dislike Rachel to the core but trust me; the percentage of people who hate Rachel is tiny. People use suggestive photos of her as a means to embarrass Rachel (because of jealousy???) even more. Worse if the media joins in the fun of spreading her photos. Don’t forget, there are bigger fans that support Rachel all the way. The reason why she topped most of the polls in forums when asked “who will eventually be crowned in MSU’09″ and mind you, I haven’t even started on her winning. Hah!

We can’t all please everyone. The black sheeps need to get this in their head that every person has the right to decide what they want just like any other human beings have the right to believe in any religion they want! We are a multi-racial, multi-religious, multi-cultural, multi-sexual and a multi-lingual country as we all know. What is Singapore to you if our society is too conservative and is not allowed to do this and do that? Don’t you think the whole “government intention to keep Singapore a safe and a harmonious society” hoo-haa pointless? It is only when you Singaporeans learn to accept everyone for who they are that we can mature as a culture. What a shame! Besides, if you are not comfortable being talked about (for some reasons, you think you are so perfect and should be treated like angel all the time) and have your scandalous photos criticized, maybe you ought to rot inside your wardrobe and die! After all, this is all for entertainment.

Despite all this “Hollywood-like” controversies, Rachel remained positive!

Hmm the media are liars too!

Hey, at least we see that Rachel Kum managed to make an impact (look at our past winners we don’t care about them anymore) to those busybodies, eh?

That leads to my point whether do you think pageant queens and models should be considered role models? Are we looking to the wrong people for inspiration?

I know a group of people out there might prolly assassinate me in the day for being a filthy yet an awesome blogger for agreeing that pageant queens and models should be considered role models. Yes to you, models are just living coat hangers. That’s part of their career. They can be a good role model as well although not all of them are. I have always regarded them as a role model for the longest time now as they have thinspired me to be thin for beauty’s sake. And that’s a good thing. Also, I began to realise the important to accept and love myself more as an individual whether or not I’m at the club or anywhere where there are a lot of people. In other words, it has boosted my confidence! I’ve always been surrounded by ignorant and intolerant people everywhere and I was really afraid to face the world because there are bound to have people criticising me without me noticing.

Some of us consider a role model to be someone who makes tonnes of money every single day, someone who does charity work or someone like Paris Hilton because she possesses the qualities of a true hero. Hah!!!!! I don’t know about you but I don’t see anything wrong with pageant queens or models being a role model for young women with high hopes in life!

Everyone has someone in mind which they look up to as role model. Well, imagine I’m a role model to the young generation. What do you have to say?